Living With Rather than Against Nature July 31, 2012

A central concept in Druidry is peace.  At the beginning of each druidic ritual, we declare peace in the quarters.  We a say a prayer for peace (which you can see in my painting I posted earlier this year).  But all of this is lip service unless you work, consciously and tirelessly, to enact peace in your daily life. And this includes living at peace with all living things.

And what does this peaceful living look like? Well, one way that peace can be enacted is by re-evaluating our relationship with the natural world.  Humans often engage in an unnecessarily adversarial relationship with nature.  Why is this?  On a larger scale its simple—we have unbalanced nature in various ways and we take up too much space.  We don’t allow wild spaces to flourish—we must control them, plant them full of things that don’t belong and may cause imbalances in the ecosystem, dump them full of chemicals that harm all who come in contact with them, maintain them with fossil fuels that heat up our world, or worse, cover them over with concrete.

Take something as innocuous as the dandelion. Most yard owners work to eradicate it and are at “war” with it, as some recent chemical commercials for eradicating dandelions seem to suggest. And all this war against dandelions is for reasons I simply can’t understand (since it is medicinal, edible, and breaks up compacted soil, looks very whimsical and beautiful, among other things). The yard is far from a natural, balanced natural state.  In fact, the yard is quite “unnatural”; as described in Gaia’s Garden, its a throwback to the Victorian Era when wealthy landowners could afford to keep big swaths of land for no purposes other than their amusement and keep cropped close to the ground by sheep. Its a status symbol, a symbol of the bourgeois. So why do dandelions keep growing in your yard? Likely because your yard has compacted soil, which means the soil is very hard packed from repeatedly mowing it with heavy equipment, making it difficult for anything other than grass to grow. Dandelions come in and break up that soil so that other things can later take root. In other words, dandelions are the first stage of nature healing your yard. Yet yard owners dump millions of pounds of chemicals trying to eradicate something that is like nature’s cry for help. And so, we call the wild things that aid nature’s regrowth process “weeds” and declare war on them, and we call things that we import halfway across the world and plant without thought to their relationship to the native ecosystem as “plants” and pamper them. And, like all things, an industry has built up around maintaining the myth that dandelions are bad and that you need to buy products to eradicate them. 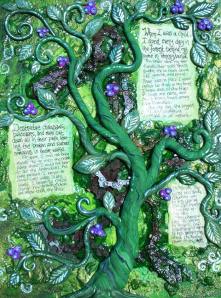 Mixed Media piece I finished a few years ago. I “liberated” a rusty chainsaw from a forest that was logged to create a story of peace and healing.

So called “nuisance” animals are another example of humanity’s war with nature. Yes, there is no doubt that a groundhog is a nuisance in your garden. I learned this firsthand this year, and will tell that story at some point in this blog. But even so, the high prevalence of groundhogs, raccoons, squirrels, moles, mice and other animals have more to do with the impact of human activity than their own. Humans have taken unprecedented amounts of land, turned it into–spirits forbid–lawns, slaughtered these creatures’ natural predators and disrupted the food chain. After all of this,  we then wonder why we have problems with groundhogs? And again, the “solution” often ends in the taking of a life: the dropping of poisoned food into holes, trapping them, shooting them, etc. And of course, let’s not forget the countless products and services that can be purchased to aid the frustrated homeowner in their approach to killing or otherwise eradicating nuisance animals (because all of these relationships, today, are tied to consumerism).

Where does this adversarial “man vs. wild” relationship come from?  Many places.  Cultural narratives we gain through advertising that teach us that “weeds are bad” and the best way of getting rid of them is by going to your local big box store and buying some expensive chemicals to dump to solve your problem.  And this consumerist culture is so short-sighted that it doesn’t consider the long-term ramifications of dumping chemical after chemical to solve perceived problem after problem.  Housing associations and local township ordinances (such as my own in Independence Township, MI) that literally ban beneficial “roadside weeds” like chicory from appearing in your front yard. Books on lawn care, gardening, etc, that ascribe to philosophies that do not privilege whole-ecosystems designs.

But I suspect that the root cause an underlying cultural narrative, developed over centuries, that is the product of a Christian-focused worldview.  The American worldview, one that was (and is) very heavily influenced by the Bible, we see that the book of Genesis immediately puts humans and plant/animal kingdoms in an adversarial relationship. Adam was given the power to name animals and to lord over them. This view gives humans the perceived right to do just that—dominate, create war, and generally shape nature to their demands. Manifest destiny, the philosophy of US government and society that stripped millions of acres away from their rightful indigenous owners, is just another version of this “power over others” philosophy (and in the case of Native Americans, it is power over “heathens.”) If you look at some of the reasons that Europeans wanted to find new land at all, it came down to natural resources (which were dwindling in Europe) and exploitation (read the history of North Carolina and the Long-Needle Pine and shipbuilding, for an example of this). And if you read many journals of the early colonials and others who were working to own/colonize/exploit the Americas, you’ll see them referencing their “God-given right” to do so. That’s not to say that all Christians today ascribe to this philosophy–in more liberal Christian views, discussions of “eco-spirituality” abound.  But I do think that, for too long, Americans have used their faith as a way of exploiting other humans and non-human persons around them.

We must be one with the world!

Alternative views—both spiritual and practical—suggest more reciprocal, peaceful relationships with nature.  These relationships embrace all of nature–including so-called “weeds” and so-called “nuisance animals” as part of a natural system. The Native American tribes hold a diversity of belief systems, but at the heart of all of them was their deep respect of nature in all of her forms.  We see this respect–living with the world, rather than apart from it–repeated in indigenous belief systems throughout the world. Some more modern philosophies also help us re-envision our relationship with nature. A permaculture philosophy, to which I ascribe, place dandelions as a top-rated plant: its a great foraging food for animals and humans alike, it has a deep tap root to bring up the nutrients and break up the soil, it provides ground cover, its quick to grow.  An animist philosophy, to which I also ascribe, would recognize the living, sentient spirit of all living things.

9 Responses to “Living With Rather than Against Nature”