To follow up from two posts a month or so ago on ecoregional druidry and the wheel of the year  and celebrating rituals, observances, and activities, I want to continue thinking about how druids can adapt basic practices of druidry to their local ecosystems.  This is particularly important for those of us in diverse ecosystems around the world: part of nature spirituality is being with nature as she is in your region. Thus far in this series, we’ve explored a druid’s wheel of the year that is seasonally-focused on a local ecosystem as well as the different ways we might celebrate this wheel of the year with rituals, observances, and activities.  Also tied to these spiritual practices are symbolism associated with the elements and directions; framing symbolism that weaves its way into our practices in a variety of different contexts. And so, in this post, we’ll delve into thinking about basic symbolism we use in the druid tradition and how we might adapt that based on an ecoregional approach.

What is symbolism? What does it do for us?

Before I get into why we might adapt symbolism and reasons to do so, I want to talk about what symbolism is in its basic form.  Catherine Bell, who did some of the most important scholarly work surrounding ritual in the 20th century, suggested that ritual practices connect people to archtypical or universal acts, attitudes, structures, or functions.  Symbols, within ritual, work like “a language for the primary purpose of communication” (61); in other words, symbols convey meaning to people who use them, and that meaning should be tied to the broader context.

The challenge, of course, comes in balancing individual needs and practices with those of the broader community.  This is a choice that each of us have to make–by moving further away from the traditional symbolism, it may be harder to align with larger community values.  If you are a solo practitioner, this may not be an issue for you.  But if you plan on running a grove or attending gatherings, it certainly may be.  Finding ways of developing a shared vision of what your ecoregional druidry looks like is in part, a negotiation with any others you might be practicing with. 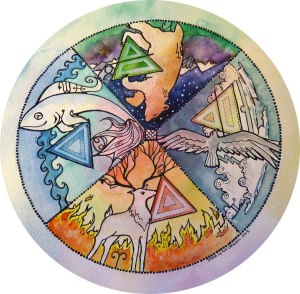 The druid revival tradition draws upon symbolism adapted from the sacred animals and trees of the British Isles.  These symbols are typically as follows:

In AODA, we add a few more into the mix (for detailed descriptions on these, you can visit this post):

You might also choose to expand the four directions to eight, but they don’t typically include animals.  Recently, at the OBOD East Coast Gathering, the Mystic River Grove added other animals: moose, skunk, turkey vulture, and turtle.

The traditional associations of the directions are used in all sorts of ritualized ways (both in OBOD and AODA) including in opening rituals and protective workings.  Because they are so pervasive and such an important part of the tradition, I personally believe that resonating deeply with these symbols is critical. So let’s take a look at how we might adapt any one of these symbols and what is gained–and lost–from doing so.  We’ll also explore adding in new symbolism or alternative symbolism.

In the druid tradition, adaptation of the basic symbolism to your local ecoregion is not only common, it is encouraged.  Part of living with the land is drawing upon the animals, plants, and energies present immediately in that land that speak to you.

Beautiful Rooster can hold the east!

Elements and directions. The elements and their directions are specific to the druid path and other Western Esoteric circles. These associations are widely used by many, and in groups, give people some cohesion and consistency. Generally, I think these associations aren’t worth changing in most circumstances, especially if you are planning on working with others, but there is one instance that comes to mind where you might change them. This comes when you have a powerful elemental force in a different location such as a huge body of water in the east, a mountain in the south, and so on.  I have found it is helpful to “feel out” where the strongest force of the element is and use that if you feel that strong pull or are particularly sensitive to it. When I moved to the Great Lakes Region, for example, water was all around me, but I would often accidentally call water in the East because Lake Huron was closest to me and I was connected with the Lady of the Lake. Eventually, I solved the problem by connecting to a lake that was much closer to me (and much smaller) in the west so that I could keep my traditional associations (which I really wanted to do).

In my case, even though three of the four animals are present in my ecosystem (hawk, bear, stag), I have substituted the salmon for a rainbow trout, painted turtle, or river otter.  The river otter is a particularly powerful symbol for me here in Western PA because otter was lost to our rivers and only in the last two decades has been reintroduced and is making a comeback–and as a kayaker, I see them regularly on my trips.  This is a powerful symbol of regeneration that I have experienced firsthand and is something I want to draw upon. When I was in Michigan, I had painted turtles and snapping turtles on my property near the sacred space, so they were what I called in the west.

On my land in Michigan, I did have hawks, but I didn’t want them too close (as the hawk would come eat my chickens regularly). So rather than calling in that energy, I called the energy of the “Rooster crowing up the sun” in the east, the energy directly on my property.  I would also sometimes call the Raccoon in the north, since the Bears were so rare in that area as it was more heavily populated.  This felt right and powerful; I was honoring the animals that were immediately present in my ecosystem (and trying to keep away predators that would do my flock harm). 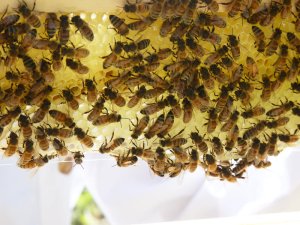 Spend time in the land around you and see what animals resonate with your own path.

Another place you might go for symbolism, rituals, activities, and observances is your own family history or regional history. Look to the folk traditions, find the magic inherent in the landscape, and use that as your symbols, words, phrases, things that resonate. Often, small bits of older traditions (folklore, folk songs, even magical traditions) leave echoes upon the landscape and cultural history, tucked away in old bookstores or even within your own family lore. These powerful symbols may find their way to you unexpectedly and be useful as you are thinking about building your own unique path.

For me, a barn-sign tradition was a delightful surprise that offered symbolism that resonates both outward upon my landscape but also in my practice. This is now part of my own druid path, as are some of my grandparents’ Pennsylvania Dutch folk magic traditions, like using the Wooly Bear caterpillar to determine the severity and length of winter. In terms of the Barn Signs, after returning to Western PA, a friend and I were taking a drive through the country when I paid closer attention to the decorations on the barns in Somerset, Bedford, and Cambria counties in PA. Many of these barns were over a century old (one had a date of 1889 on it) and featured certain designs. Out in Eastern PA, they have a different kind of magical barn sign, a more widely known “hex signs” and they are colorful with symmetrical images and pictures painted on a round circle. But in Western PA, the tradition seems to be very different: a (usually) red barn with a white symbol that is cut out and applied to the barn. One of the most amazing had two decorative pentacles surrounded by a pentagram: very clearly a magical sign. I’ve worked some of these, as well as the “country” tradition of using the pentacle everywhere on houses, as one of my primary protective symbols.

You don’t need to stick just with animals or directions for symbolism that you can use to tie to your druid practice.  For example, other symbolism tied to the four (or seven) directions might also be useful for you to consider. These might be songs, movements, hand signals, sacred mountains, images, four sacred places, pretty much anything you want that resonates with you.

For example, I have a series of healing plants (for healing work) and sacred trees (for my daily practice) that I call regularly when doing daily rituals or other kinds of rituals. These came through developing relationships with the living earth as well as studying herbalism and using my intuition. I have many versions of healing plant correspondences that I’ve developed over the years. A general one of plants that I like and work with a lot for my own healing looks like this (and I absolutely use the 7 directions cause I want to add in more plants!):

One of my versions, specific to cold/flu healing, looks like this:

Sacred Trees or, you could develop a set of symbols based on sacred trees in the Ogham or locally.  One might look like this:

The possibilities for adapting to your local symbolism are endless–it is a joyful process that will put you more in touch with the living earth. I hope that this post has given you some ideas of how you might further adapt your own druid practices to your ecosystem.  I’d love to hear more from you about how you may have done or are thinking about doing of this adaptation work!

I made this during a virtual spiritual retreat in October. It is a prayer and a offering to the land. It is a slab of local wood (sawmill remnants) that I wood burned and then I sealed with a mixture of beeswax and olive oil. I hung it in the western quarter of our Sacred Grove under a spruce tree. This is my favorite poem, and it offers a vision of a brighter future. #wendellberry #worksong #poetry #druid #druidry #prayer #honoringnature #druidgrove
I’m starting to work on the layout for my third oracle deck, which is called the Tree Alchemy Oracle. This is a deck that I collaborated with nature to create through a process of eco printing over the last five years!!!! Right now, I’m looking for some opinions… I’ve narrowed down the card back to these possible to eco prints. Which would you prefer to see on the back of an oracle deck? Number one or number two? Thank you so much! #treealchemyoracle #treealchemy #ecoprinting #ecoprint #oak #sacredart #lovingthegreen
Regenerative practices at the Druids garden homestead. This week we are working to plant in 100 trillium and 100 black cohosh on our forested 5 acres. These plants represent native endangered woodland plants that have been radically overharvested here in the Allegheny mountains. So we are working to restore our forest to healthy balance by introducing these native plants back to the land. #blackcohosh #blackcohoshroot #regenerativeagriculture #forest #landhealing #healinghands #trillium #forestrestoration #druidry #planting