I think that druids, and those of similar earth-centered paths, need to get really serious about sustainability. For what good is a spiritual tradition without the physical action that accompanies it? How can we revere the land while we take part in a society that systematically degrades that land in the name of “progress” and “growth”?   Towards that end, I propose that we take four steps towards a greater awareness and practice of our own impact on the planet.  We must begin to do the following:

The first step in this approach is, of course, educating oneself on the issues and understanding on a deep and meaningful level the connections. This past term, I taught an interdisciplinary research methods course with a sustainability theme.  Through teaching this course and talking with knowledgeable friends, I would like to recommend a triad of books that will help better understand issues of sustainability and their connection to druidry.  Here, in essence, are three books that I believe every one of us should read to better educate ourselves and shift our worldview:

Thinking in Systems by Donella H.Meadows

This was a book recommended to me by a friend, and it ended up being one of three core texts for my course. This book is not actually about sustainability on the surface, but about systems theory, or the theory of the relationships between elements in a systems.  One of the problems that we have as a culture is that we don’t currently think in systems. We don’t understand the relationship of human activity to the larger ecosystem–we see these relationships as linear, rather than cyclical.  We think that when we buy something, it comes out of nowhere and when we throw it away it goes away.  We think that our actions don’t have consequences, or that our actions are so small that they don’t matter.

A systems perspective helps us understand these relationships and–this is critical–intervene in existing systems to build more sustainable practices.  While this book is a fairly technical introduction to systems theory, it also provides you with a framework or paradigm, a way of seeing the world and for that it is invaluable.  I see it as a foundational text–one necessary to learn anything else about sustainability.  After you finish reading this book, you will see the world in a new way, and that new approach can help you personally as well as the world at large.

Quotes from Thinking in Systems:

I should also mention that a systems approach is used in the last two books I recommend, so this is really a wonderful read and place to get started. 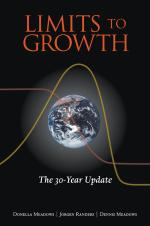 The Limits to Growth

One of the challenges that we face in our society is a lot of misinformation and not being able to see the big picture of what human activity is actually doing (or, at worst, flat out denial about our own impact on the planet).  I blogged about this a while ago using a rhetorical theory, stasis theory, to show the breakdown in communication.

The basic premise of the Limits to Growth is simple–humanity, particularly humans in the western world, have been working under a “growth at all costs” model and that growth comes with both costs (environmental, social, etc.) and that growth is limited based on the material resources of our planet.  (Consequentially, another book I’d recommend that delves into the economics of material/natural resources is John Michael Greer’s The Wealth of Nature which is a wonderful read).

The Limits to Growth (30 year update)is, honestly, one of the most challenging books I have read in a while. Not because its a difficult read from an intellectual standpoint–in fact, the prose is quite clear and although they are using extensive data and mathematical models, they are presented in a clear and understandable format. No, its a difficult read because, by the 3rd chapter, when you read about the massive amounts of ways in which humans have pushed the earth beyond its capacity and the mathematical models predicting different “growth” scenarios, the enormity of the problem that we have on our hands is overwhelming.  We hear a lot about the environmental challenges in our world–but seeing them presented in a data-rich format, one after another, is something else entirely.  This book provides a planet-wide view of the problems with growth, the limits to our world’s ability to handle our destructive behavior, and suggestions for intervention and change.  I think if every person read this book with an open mind, we’d wake up to a radically different reality.

Quotes from The Limits to Growth:

Mystery Teachings from the Living Earth

Mystery Teachings from the Living Earth: An Introduction to Spiritual Ecology by John Michael Greer

One of the problems I’ve noticed with many of the earth-centered paths, druidry included, is that most people are more interested in the magical aspects than earth-centered, sustainable living. That is, druids seem dedicated to celebrating the turning of the wheel and embracing the earth through magical means, but still do not take the steps to truly enact sustainable living practices in their daily lives (obviously, I take issue with this, which is one of many reasons I write this blog).

Enter John Michael Greer, the Grand Archdruid of the Ancient Order of Druids in America (of which I have been a member for almost seven years).  Greer certainly does his fair share of quality writing about druid magical traditions (see his Druidry Handbook, Druid Magic Handbook as two excellent examples). But Greer also writes on a host of other subjects, such as Peak Oil, and this has given him a unique perspective on the practical applications of druidry in terms of sustainability and making the transition to a post-industrial world.

Greer has done druidry and other earth-based spiritual paths a serious service in writing his new book, Mystery Teachings from the Living Earth.  This is because he is able to expertly combine many of the theories and insights from the sustainability movement into a mystery / earth-based spiritual tradition.  After reading Thinking in Systems and The Limits to Growth, I was left with lots of questions, not the least of which, “What insight can druids provide to the conversation of sustainability?” Greer provides one such answer.  Greer’s book examines seven principles within the mystery tradition, or ancient guidelines that have been, as Greer suggests, highly abused in recent times. By tying these ancient mysteries with insights into the living earth (which includes a healthy dose of systems theory) Greer provides us with spiritual insights that are transformative. The principles are simple and yet profound–understanding them takes but moments, enacting them will take a lifetime. I like this book so much because it gives me, as a druid and as someone seeking to constantly become more sustainable in my own life, spiritual principles that align with that goal.  It connects the dots between two conversations that don’t always align.

To give you a sense of this (and how nicely this book ties into my other two suggestions) here is the first principle, the Law of Wholeness, “Everything that exists is part of a whole system and depends on the health of that whole system for its own existence.  It thrives only if the whole system thrives, and it cannot harm the whole system without harming itself” (p. 21)  Reading this principle takes but a moment of time, but really truly understanding it may require a lifetime of meditation, study, observation, and action.  In addition to presenting his principles, Greer expertly describes the principles in terms of the natural world using metaphors and examples.   I will write no more here of the content, because one of the best parts of the book is the discovery as you move through it.

I hope that you will give these three books a serious read.  They have really helped me develop a deeper understanding–both physically and spiritually–of my role, as a druid in transitioning to a more sustainable, earth-centered world.

I find painting bookmarks so relaxing! I think we are all feeling the stress of a pandemic that has gone on nearly a year. So sometimes, all I can do is paint some bookmarks. Blessings to everybody! Stay strong as we get through the last part of all this! #watercolor #bookmark #watercolorbookmarks #watercolorbookmark #whimsy #whimsicalart #trees #spiral #sacredart #fullmoon #moon #creacentmoon #wintertrees #baretrees
Where does the door lead? Where did the wren and get the golden key? Sometimes there is such a fun story in a painting. This painting is a work in progress for a good friend of mine who is retiring. Her retirement actually saved my job, and I’m very grateful. #watercolor #tree #goldenkey #door #whimsy #whimsical #tree #sacredtree #roots #spiral #wren #bird #birdinflight
We had a fun day making candles! The beeswax ones are from our beehives…wax rendering is a tough job! The pink votives are all recycled wax. We don’t like to waste anything on the Druids Garden Homestead, so we save the small bits of wax and candle ends in a bag and eventually we get enough to melt down and make a new candles from. #candles #beeswaxcandles #sacred #sacredtools #spiritualtools #recycled #recycledwaxcandles #bees