In the druid tradition, we recognize that the solar currents, those currents of energy coming from the sun, are extremely powerful. And so, when the sun in the noon-day sky suddenly darkens, ancient peoples saw it as an incredibly bad omen. Dragons eating the sun, battles bewteen the gods, portents of other evil and pestilence across the land accompanied a solar eclipse. Given some of the extremely shocking and difficult events and the rise of hatred in the US of the months and weeks leading up to this eclipse, one could approach it with some trepidation. I wanted to share a bit of a druid’s perspective on the eclipse today.

In his new book Secret of the Temple, John Michael Greer describes how temples were designed with particular features to channel the energy of the sun down and radiate it out across the land in blessing.  In AODA, for example, our main seasonal celebrations do this same work: bringing down the light of the sun to radiate it out upon the work.  While this is how AODA and the druid revival frame the solar and telluric currents, these ideas are certainly much older.

Given the worship and reverence to the sun in so many ancient people’s lives, it certainly is not surprising that if the sun suddenly blackened in the middle of the day, it would be an ill omen indeed.  What if the light didn’t return? People wouldn’t survive long in darkness.  For that brief moment, the utterly consistent sun appeared like it was being blackened from the sky.

Today, our grove met to do ritual during the eclipse.  at our grove deep within the state forest.  Our grove has an ancient Sugar Maple tree in the center and is an easy 15 minute hike in from the trail head.  When we met, we were in the sun by the lake, but decided to go into the grove and do the ritual while the eclipse was taking place.  Our ritual was simple: we did a simple grove opening.  I played the flute and my two friends worked to radiate light into the world, particularly focusing on our human world.  We did this for a time, and then paused to note the changes in the forest floor–the patterns became ripply at first, like waves in the ocean. 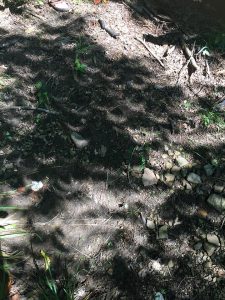 After that, we continued our ritual.  The second part of the ritual was also simple: we recognized the value of self care in these times, and we smudged each other.  Then we used a lavender hydrosol to bring clarity and focus for our journey ahead.  At this point, we closed out the grove and did an eclipse walk as the darkest point of the eclipse came into focus.

Walking in an Eclipse

The land stilled.  Everything grew quiet. Walking in the woods during the eclipse was incredible.  The sun’s rays of light behaved more like the moon.  It was if the sun and moon’s roles were reversed.  We didn’t have any fancy glasses or self-made boxes or welder’s masks.  We didn’t need any of that.  All that we needed were the trees and the light filtering through them.  We saw the eclipse much like our ancestors did–through the gentle light of the trees.  When the breeze blew, the little crescent moons turned into waves on the forest floor.  My friends and I danced in the sun’s moonbeams (or was it the moon’s sunbeams), frolicking along the forest path.

It was one of the most magical things I have ever seen.

The Moon’s Sunbeams (or Sun’s Moonbeams)

Experiencing the extremely magical eclipse in the forest taught me a valuable lesson–I had been feeling rather “doom and gloomy” about the world as well as about some other personal losses that happened in the last two weeks.  I felt like the eclipse was there to continue the pattern, to burn my retnas, to plunge my soul into darkness, to plunge the world into chaos, much like the Ancient peoples believed.  I had been reading too much online, letting some of the darkness of the recent events lodge within my soul.

And then, I went out to experience the actual eclipse.  And my heart was filled with joy as the moon’s sunbeams, or the sunny moonbeams, or whatever you want to call the flickering and wavering crescents of light, came down on that forest floor.  We might have went into that forest with heavy hearts and to do a ritual of light.  But the sun and forest surprised us with its own light.

It was a powerful experience, not just to see an incredible rare and glorious event of seeing the forest while an eclipse is going on.  But because it taught us, once again, about the healing power of nature.  Sun had no less power when she was behind the moon (or behind a cloud, for that matter).  She simply had different power, focused power, and it was a sight to behold!   So friends, keep your spirits high in these dark times.  Dance in the light of the sun and moon, and let your spirit soar.

Crescent Sunbeams, courtesy of the Moon