Amaranth is a wonderful plant to grow for a variety of purposes. First of all, many varieties of amaranth are absolutely beautiful.  I grew Hopi Red Dye Amaranth this year, and as you can see from the photos, its stunning.The “red dye” part of this variety refers to the Hopi Indians who would grind it in with their cornmeal to produce a reddish cornbread.  Amaranth has been grown in Mexico by the Mayans and other Mexican and South American indigenous peoples for its nutritional qualities.

Nutritional Qualities: Nutritionally speaking, the seeds/grains of amaranth are one of only a few grains that has a full protein, so when you eat amaranth, you are eating a very healthy grain with excellent nutritional value.  It has lots of iron, fiber, lysine (a critical amino acid) and calcium in addition to the protein! You can also eat the leaves, which taste a bit like spinach, and they make an excellent addition to salad. I really think Amaranth is a super-food, especially for someone who is vegan/vegetarian or wants to reduce their meat consumption and balance their food intake.

Magical Qualities: Amaranth has a long magical history. It was used in the ancient rituals of Central and South America as part of an offering.   The Aztecs saw it as the most sacred grain, sacred even above corn.  Zuni legends suggest that this plant was brought over from the otherworld.  Wreaths made of Amaranth flowers are said to have healing properties.  The plant is also said to aid in spirits the crossing to the otherworld. 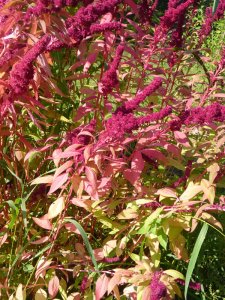 Growing Amaranth: Amaranth should be started from seed after the last danger of frost has passed (for me in Zone 6 South East Michigan, this is late May). When I grew Amaranth this past year, I found it very pest-resistant and incredibly easy to grow. I had it in my main garden, so I don’t know about its resistance to deer or other small animals (I will test this out next year).   I gave it fertile soil and watered it a bit because of our drought, but that’s really all I did and it just bloomed and was a beautiful centerpiece of my garden.  Next year, I plan on growing the Red Dye version again as well as some Golden Giant (which I am told has a greater yield of grain).  The Amaranth was beautiful through most of the summer, but really became vibrant in August.  It was amazing to see–my green garden was all around, and in the very center, there is this vibrant spot of pink where the amaranth was growing.  Everyone who visited the garden was impressed with it!  The photo below shows Amaranth about a month before harvest.  Notice how the stalks start green then go to pink then vibrant pink? So amazing, Amaranth is!

Wildlife Benefit: If you aren’t into grains or greens, the local wildlife will be, so you can leave it on the stalk and after it dries out, finches and sparrows will have a nice meal of it.  I also noticed that many predatory wasps were often flying among the amaranth stalks (and these are excellent bug/pest control, so you want to attract them). My chickens also enjoyed eating some of it (and my cockatiel, but he’s hardly “wildlife.”)

Harvesting Amaranth.   Later into August, the plants started falling over.  When they were nearly touching the ground and had started to dry out, I took scissors and cut them off near the head.  I added the stalks to my compost pile.  This left me with a big bin of amaranth heads.   Since I knew the seeds fall out easier once the plant is dry, I laid them out on a tarp  in my covered porch for a few weeks.  The heads dried and grew very prickly.  When you are handling the dried amaranth, you REALLY need to wear garden gloves!

So after the amaranth stalks were dry, I found a stainless steel bowl and then a little strainer (also stainless steel) that I fit into the bowl.  In a well-ventilated area (because this process produces dust), I took each piece of amaranth and I rubbed it in the bowl.  My cockatiel, Ziggy bird, oversaw the operation. 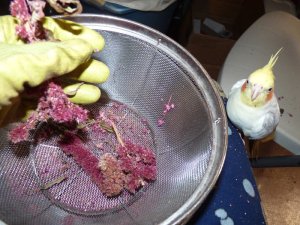 After I finished, I was left with a big bowl of Amaranth seed and seed pods. The darker stuff in the photo is the actual Amaranth; the lighter stuff is the dried seed pod.

I was also left with a bunch of amaranth refuse, which I added to my compost pile (I saved a bit to try in papermaking in the spring!)

The last step in preparing your Amaranth for eating is getting rid of the chaff (although those seed pods themselves are edible, so if you end up with a few still inside your grains, its ok).  To do this, I went outside and I shook my bowl so that the seed pods surfaced. Then I gently blew into the bowl–the seeds themselves stayed in the bowl as long as I didn’t blow to hard, but the seed pods, which were lighter, blew away.  My chickens flocked around and ate the chaff as it fell.  I did this for about 15 minutes, and I was left with beautiful, mostly clean, Amaranth seeds. Some will be for planting, but most will be for eating!

So I really encourage you to experiment with amaranth! Its a wonderful plant to grow!

Sneak peek of my new Tree Alchemy Oracle deck! This is a mock-up deck I had printed as a one off to start to develop the readings and approaches to thus deck. These are all ecoprinted cards. #treealchemy #ecoprinting #sacredtrees #trees #sacredart #workinprogress #oracle #druid #druidry #Ihavebeenworkingonthisprojectfor10years
Got to take out my earthing moccasins for a hike on the land... I used elk leather and they are so supple. As part of my earth honoring lifestyle, I want to learn how to make a lot of my own footwear and repair it...so this is a start! The geese definitely didn’t know what to make of my my moccasins! If you want to learn to make these, @earthingmoccasins has great tutorials! #moccasins #earthing #earthingmoccasins #druidlife #happydruid #happyfeet #whimsy
In this weeks blog post, I explore the magic, divination, human uses and ecology of the Flowering Dogwood. Link in profile or simply google “Druids garden blog”. I love this tree and it has so much to offer us! Happy Beltane. #dogwood #druidsgarden #druidsgardenblog #sacredtrees #americantrees #eastcoastrees #floweringdogwood #trees #beltane