If there is one thing that’s pretty difficult to find locally, I’ve found it to be mushrooms.  Once when I was at the Ann Arbor Farmer’s market (which is about an hour and 15 min drive for me, so I don’t go often) one group of farmers were selling them.  But at my much smaller and local market, unfortunately, they are impossible to find.  And since I strive to eat as local and sustainable of a diet as possible, I decided to try my hand at mushroom gardening. 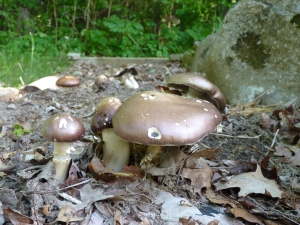 Growing mushrooms is a really earth-centered activity, and one that puts you in connection with a whole other domain of life–the fungal kingdom.  Mushrooms are actually the reproductive organs of a much larger plant, often characterized by white veined mycelium.  These organisms are responsible for a great deal of the life cycle of the forest; breaking down dead woods and creating rich humus for new life to spring forth.

While you can search for wild mushrooms (and I have done so), the practice is dangerous if you don’t know what you are doing.  An alternative to being a wild mushroom hunter is to grow a bed of them in your property–or do both!

This post will detail my experiences in working with several mushroom kits.

Where to get a mushroom kit?

Last year, I met a few guys who were selling mushroom kits at our local Clarkston, MI Farmer’s market (their website is here).  After talking with them and learning about their dedication to permaculture and local foods, I was ready to purchase one of their kits.  They had a number of different kinds of kits; I opted to start with two indoor kits–Reishi Mushrooms (which was given to my sister) and Oyster mushrooms. These were nice for the winter months because I had fresh mushrooms growing in my bathroom where it was nice and moist due to my husband’s shower obsession (consequently, it was super-amusing when people would go into my bathroom and try to figure out what the bag of mushroom spawn sprouting oyster mushrooms in the corner was…)

They do ship out of South East Michigan.

To start one of these kits, you need a shady location that is not near conifers (which makes the soil too acidic), newspaper, wood chips from a hardwood or fuit tree, and straw.  The wood chips proved to be the most difficult for me, as I didn’t have my own wood chipper.  I asked around and one of my good friends and neighbors had an apple tree come down in his yard and a chipper–in exchange for an afternoon of labor, we chipped up most of the branches (consequently, if I had waited only a few more weeks, they did some trimming of trees on my road and I could have had all of those chips–so wood chips are available).  You can also often get wood chips by calling tree removal/tree trimming/landscaping services.  The key is that the wood chips are VERY fresh–you don’t want any other mycelium to get there first.

I had a perfect spot in my yard for the garden–which should be in a moist area in full shade.  I had some rock landscaping that blocks the spot from the sun in the afternoon and several large hickory trees that block the spot from the shade in the morning.  The location also gets runoff from the higher points in the yard (moss was already growing on the rock landscaping there, so that was a good sign).

We dug out the area (about a 3′ x 10′ bed) and layered it with straw and wood chips, keeping each layer moist.  We added mushroom spawn in little chunks throughout the area.  We covered the whole thing with newspaper and paper bags, and then covered that with a tarp.  I kept watering it throughout the rest of the summer and I uncovered the tarp when it was raining.

We put the mushroom garden in in early August, and since the mushrooms take 6-8 weeks to really proliferate the straw, by the time it would have been ready to go to the next step, it was winter.  I removed the tarp, covered the whole thing with a pile of leaves to insulate it for the winter, and waited.

In the spring, I followed the kit instructions and fruited the bed with 50% dirt and 50% spagham moss in late April which was supposed to encourage mushroom growth.  I promptly forgot about checking on the mushroom garden bed for about a month.

As I went to get the mail this morning, lo and behold, there were 10-12 lovely King Stropharia mushrooms in the bed of various sizes–the largest about 7″ across (and I understand they get even bigger than that)!  The mushrooms had excellent timing too, because its too early in the season for much beyond spinach

and lettuce in the garden.

And so, I am quite pleased to see the bed producing mushrooms.  While it did require some initial up front work and two afternoons of hard labor, it was well worth it!

These King Stropharia mushrooms taste like a cross between portabella and an oyster mushroom in taste.  They look quite similar to a portabella except they have a wine or brownish top and purplish or gray gills.  They are delicious if you grill them with a bit of BBQ sauce (as you’ll see in the photo here!) 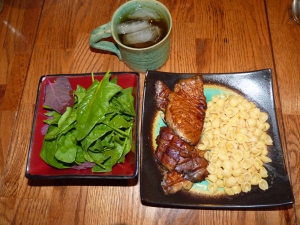 Mushroom Meal (with my own spinach, mushrooms, and herbal tea)