Vermicompsting II: The Evil of Plastics and “there is no such thing as ‘Away'” January 28, 2014

Earlier this week, I talked about vermicomposting and how to build your own worm bin.  In this post, I want to talk more about the spiritual side of working closely with worms in a vermicomposting system and what gets “left behind.”

I’ve pointed out before on this blog about how nature is a perfect system. Nothing in a forest is wasted–the trees drop their leaves which create a rich floor of humus, the microbial and fungal life breaks down the dead plants and animals, and the nutrients cycle through and through. Permaculture design, based in natural principles, recognizes this and uses it in several design principles, including the principles of “produce no waste” and “catch and store energy.”

Artwork I created as part of this experience with a powerful message–there is no such thing as “away”.

Humans, especially in indigenous cultures, lived within this system, being part of this system. Perhaps some stone tools and burial mounds remain to mark their passing, but they had small ecological footprints. Fast forward to modern-day America. Most of what we use does not come from the larger landscape without a substantial cost due to the amounts of chemical processing such “stuff” undergoes, and most of what we throw “away” does not cycle back into that landscape easily.  We make mountains of it, literally, rising up out of the earth.  Those mountains are disconnected from the natural system, they lock up the resources along with chemicals and a bunch of stuff that is harmful if it returned to that system (consider, for example, toxic sludge).

I didn’t realize that when I began the worm bin project, I’d see the same thing at work in my worm bin. 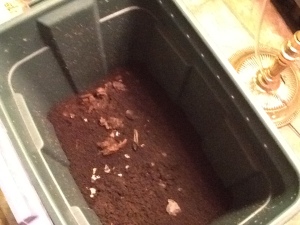 As I mentioned in my last post, my worm bin was complete after 8 months of composting down (and I probably could have harvested it sooner), and I was very excited to harvest the castings and start the bin anew.  I started a fire in my den, and enjoyed the warmth of the flames while I sifted through the top of the bin, the crumbling, moist, beautiful castings a dark brown in color. Handful by handful, I moved the finished castings into a bucket, sifting through the castings carefully to remove any of the worms in the process (the small ones are sometimes found higher up in the compost, but the larger ones always are lower in the bin).  It was a very meditative process, and I enjoyed getting my hands in the dirt (it is, after all, January and my garden is frozen solid!)

As I sifted through handful, I found my first piece of plastic. Unaltered, unchanged, just a bit dirty. I monitored everything I put into that bin–and tried hard to only give the worms what they could digest. But the plastics had slipped their way in.

I stared at that plastic, about 2″ long, white, and crinkled. I though about the worms’ inability to digest it, to do anything with it but let it sit in the bin and work around it. I wonder if they tried to eat it? I wonder what it tasted like? As I stared long and hard at that plastic in my hand, covered by worm castings, the ramifications of knowledge I learned while still in childhood hit me–2000+ years for that piece of plastic to decompose, if not longer. I put it aside, and continued the work of harvesting worm castings and putting my red wriggler worms back into their bin.

As I continued to sift my worms out of the compost, I found more and more plastic–the coating from a label I missed on a banana, a twist tie, a small tag once included a stem of a vegetable. I thought about how my worm bin was a microcosm, and that worms and other bacteria everywhere are engaging in the same cycling of nutrients all around this planet, and the plastics that get in the way.

It was a powerful moment, there in my den.  We all know about how plastic doesn’t break down, how we over-use it, and over-produce it.  How everything comes in plastic, how we routinely throw away plastic that can’t be recycled.  With each time we do that, that plastic goes somewhere–there is NO such thing as AWAY.  How plastic sits in our landfills, washes up in our waterways, ends up in our foods and bodies.  And yet we treat it so carelessly, throw it away, and never think about it again.It doesn’t just go “away.”  Where does it go, you ask? 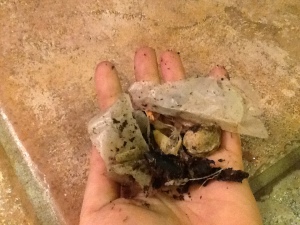 All plastic found in my worm bin!

This whole experience has made me, once again, re-think my relationship to the natural world.  How can I, ethically, purchase foods with plastic?  How can I throw any plastic “away” (even that which cannot be recycled) if it doesn’t return to nature?  Now that I’ve had a first-hand look at this within the microcosm of my worm bin, I think my next great task is to find ways to eliminate excess plastic consumption from my life, to use what’s already in my life to its best and fullest, and to teach others to do the same.

In response to this experience, I also painted the piece that you saw at the beginning of this blog post.  Its a powerful reminder that we are not disconnected from that cycle, but part of it.  Everything we do is part of that cycle, whether or not we want to realize it.  I think sometimes we believe these things, internally, but so much of our culture has taught us to think the opposite, that our actions still reflect that culture rather than those internal beliefs.  I’m constantly finding myself in the “consumptive throw away mode” without even realizing that I’m there–and this experience was a powerful reminder of the need to continue to move out of that mode for good and find better ways of living and interacting with the world.