One of the questions that many druids face, particularly if they are working in a group of any size, is how to plan a good ritual.  A ritual that is meaningful, powerful, moving, and engaging to all participants.  I’m sure anyone who has attended a druid (or most other forms of pagan gathering) remembers standing around in a giant circle watching people read from scripts. Sometimes, a scripted ritual can be a moving and meaningful experience, particularly with competent ritualists.  Sometimes, however, they are not as moving or enjoyable.

The traditional scripted ritual goes something like this: a small group of ritualists design and plan a Samhain ritual. They put countless hours into the planning, and then bring in others to assign roles, practice the ritual, set the stage, and so on. A larger group of participants then come to attend the ritual. They may be able to participate at small points; chanting Awens, making offerings, and so on.  But largely, these roles are passive. The participants, then, are there to experience the ritual, to witness it, and to experience the energies present. 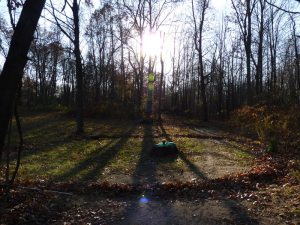 Now, let’s rerwrite the above Samhain ritual.  The small group of ritualists again get together prior to the event, but this time, they decide on a framework: honoring the ancestors, with three parts – honoring the ancestors of the land, honoring the ancestors of blood, honoring the ancestors of tradition, and messages from the ancestors (divination). They also establish parts for a standard opening and closing, as befits their tradition. They each take a theme. At the event, time is set aside to talk to all of the event participants about the ritual, and then to allow each participant to select a group to join. In these smaller groups, participants brainstorm ideas, develop a plan, and practice their plan. At the ritual later that day, each smaller group offers one piece of the ritual tied to one of the four themes. One group offers sprigs of cedar as a blessing and shares uses of cedar by ancestors of the land, another group speaks of several prominent ancestors in the tradition, and the other group invites each participant to speak the name of an ancestor and makes offerings. Each group and individual has their own work; nobody is left out, and everyone can make a positive and powerful contribution. No single person knows every part of the ritual, and there is joy in seeing what each group has done.

Crazy? Actually, it works beautifully and I’m going to describe in more detail how to do this. My alternative to scripted rituals is what I call the CCC Ritual (community, collaborative, creative). This approach can be done in a group setting, anywhere from 4 to 40 or so active participants: that is, it is appropriate both for a grove of varying sizes or for a small druid gathering. I suspect it could work with a larger group with, but I have no experience facilitating it for a group above 40, so today I’m sticking with my experiences.

To script or not to script?

There’s nothing wrong with scripted rituals; Scripts provide consistency: you know exactly what is going to occur in the ritual, who is saying and doing what, and at what points.  From a ritual organization and ritual writing perspective,  they are also useful for people new to the tradition, as the script offers something that can be reflected upon, or a part read from, without concern. They can be carefully planned in advance.  They are necessary for certain kinds of rituals, like initiations, that are meant to always be performed in the same way. These are good reasons to use scripts: but also good reasons to move beyond them on occasion.

The occasions where I think the CCC ritual approach is most warranted is when you are looking for a way to allow for more participation and ownership in a ritual, where you are looking to do something new (especially with rituals or events that are starting to fell tired and old).  It’s also highly appropriate in mixed groups where people are coming from different traditions–this allows these multiple faiths to interact positively and each share. 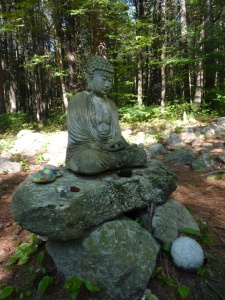 Statuary in a Labyrinth

There are essentially two approaches to the CCR, and it is based on the size of the group and the experience level of a group.  For a group that has experience and has been working for a while together, I suggest approach A.  For a larger group or less experienced group, I suggest approach B (approach B was offered as an example in the opening).  I’m going to share both approaches, then offer some real-life examples of how they can work.

Approach A: Less Structured.  This approach is really great for groves or other small gatherings when at least half of the participants have some ritual experience. In this case, the organizers of the ritual decide a theme in advance with several interrelated groups and then the group gets together to talk about the theme and break into smaller self selected groups.  You need about 2 hours for this: 25 minutes or so for the larger group discussion, 5 minutes for the groups to form, and then 1.5 hours for the groups to do their planning and practice.  Then, afterward (immediately or sometime later in the day or weekend) everyone comes together and enacts the ritual.

Alternatively, you can come together with just a broad idea (e.g. land healing) but then you’ll need more time in a large group to decide the framework for proceeding.  I’ve found it’s a bit more efficient to already have the broad idea and themes present, even if people are able to comment on them in advance (say, in a grove or gathering forum).

Approach B: More Structured. The more structured approach would be appropriate for a larger gathering where there are a lot of unknown people.  In this approach, the ritual organizers would select a theme and sub-themes.  Each ritualist then, would be in charge of leading a group, preparing and presenting some options, and helping make sure that group was well prepared.  The difference between approach A and B is the nature of the small planning groups: are they completely autonomous, or do they have a leader who can help the group come up with an appropriate and moving idea?  The example I provided above with Samhain demonstrates this approach.

A few more items of note.  First, not everyone who comes to a grove or gathering wants to participate.  You should always reserve an “observers” group that holds space and that does not directly engage in any of the planning or ritual.  This gives anyone who wants it an “out” to simply be present.  Even within small groups, not everyone needs to participate in the ritual–the group of six may elect 1 spokesperson who does that part of the ritual.  Finally, I will also note that it is helpful to give people as much information as you can in advance about the process, the themes, and the ritual.  Then they can think about it, maybe bring something from home they want to contribute, and so on.

The first  large group ritual I experienced using this approach was at a Pan Druid Beltane celebration that took place a few years ago. One of the big projects was to help build a druid-themed shrine at the Land Celebration in Gore, VA. The Land Celebration already had many different shrines to different spiritual paths, like a Jewish Wailing wall, a Buddhist shrine, multiple labyrinths, and so on.  After we built it, the final step was to ritually consecrate it.  Of course, we could not have planned this ritual in advance because we didn’t even know what the nature of the shrine was going to be.  So, as a group, we set forth to design our ritual, coming up with multiple groups that blessed the shrine, blessed the ancestors and divine, “listened” to the land, made offerings, and opened/closed the space.  It was a beautiful ceremony, and not only allowed the druids of different traditions to share pieces of their tradition; it allowed all to contribute and empower the shrine.

In a second example, over the summer, we hosted a small Land Healing celebration for about 14 druids. The overall theme was “land healing” and we wanted a healing ritual for the land not just here on the homestead where we were hosting it, but also a way for others to take that healing back with them. Almost all participants were experienced druids who had done multiple kinds of group rituals before and most who had worked together at larger OBOD gatherings over a period of years. Together, we decided on the earth, sea, and sky as our three themes. Participants self selected into the groups. Each group of 3-4 people then worked to bring the healing energy of earth, sea, and sky both inward to this land and outward to all lands.  It was a beautiful ritual: we used a standard opening with assigned parts.  The earth group had us write on and bury stones, sending the energy out to the land. The water group had different waters from around the world, and each person was also asked to bring water to the gathering from their home.  We ceremoniously combined the waters, blessed them, and then each participant later got a small vial of water to take home. The air group focused on bringing healing energy through song (common to wassailing and other traditions), movement, and music.  As the ritual unfolded, everyone was able to experience two new things from the two other groups; we closed the ritual with group divination.

Some Themes for Rituals

You can do a lot with this framework, and draw upon various kinds of themes for rituals.  Here are some possibilities: