As we move into the dark half of the year and move closer to Samhain, the temperatures drop, the killing frosts come and the plants die back. The leaves grow brilliant and then fall.  Brown and tan dominate the land as the earth falls asleep. But there in the waning light is the brilliant, beautiful golden yellow of the  Witch hazel!  Around here, Witch Hazel (Hamamelis Virginia) begins a magnificent display of tiny yellow flowers, appearing to explode outward with many delicate yellow petals.  As the last of the leaves fall, if you walk through a forest with Witch Hazel, you are struck by the beauty of these wild and warm yellow flowers. everything else may look dead, but Witch Hazel is alive and thriving. The time of Witch Hazel is the time of late fall and early winter, and it is a powerful and magical tree indeed.

Witch Hazel is also known as winterbloom (for fairly obvious reasons), snapping alder, spotted alder, tobacco wood, pistachio or wych elm.  John Eastman describes that the name “witch hazel” may be derived from the Anglo-saxon wych (which is related to the word “whicker”) which means “bending.” Because the leaves have an elm-like quality, it was sometimes called wych elm.

Witch Hazel is often found as an understory tree in both evergreen and deciduous forests.  Here in Western Pennslyvania, you can often find it as part of the understory of the Eastern Hemlock/Beech forest or even the Oak-hickory forest.

Witch hazel just as it emerges….

Witch Hazel loves a part-shade or full shade damp place to grow, so you can also often find them along forest streams.  Witch hazels are shade tolerant, slow-growing, and often have a growth form with several smaller trunks coming up from a central stem; the trunks often grow crooked and at odd angles.  When the flowers open up in the fall, they also open up their seed pods, shooting out two black seeds from each pod.  While this has not happened to me, in John Eastman’s Forest and Thicket book (a fantastic book), he mentions getting hit by the flying seeds at distance up to 10-20 feet!  The lovely flowers are insect-pollinated by gnats and late flies.

I want to speak a little about the flowers of the Witch Hazel since they are so magical and unique. The flowers emerge just as the leaves of the tree begin to turn yellow in the fall and even after the leaves drop and freezing temperatures set in, the flowers continue to persist for some time.  Here, in Western PA, you can find them sometimes into late December, depending on the year. The flowers themselves look like a little yellow firework or sparkler–the bud opens up and over two dozen very thin, long flower petals unroll and twist around. From a distance, they almost look like little pompoms popping out from the branch.  They are quite special, with a warm sunny yellow that is just bursting with hope, life, and possibility.

The Medicine of Witch Hazel

Witch hazel is in common use today. What you purchase in the store called witch hazel is actually a steam distillation of the branches of the witch hazel. Witch Hazel branches are best distilled in the spring (for this you can use an alembic, similar to making an essential oil).   Witch hazel is easily found in the distilled form in drug stores, where it is used for mouthwashes, reducing inflammation, addressing skin irritation, addressing sore throats (especially inflamed), hemorrhoids, acne, wards of certain viral infections, and much more.  You can also make a tincture of it (1 part alcohol to 5 parts fresh bark and leaves) and you can create a very astringent rub that can relieve pain.

Native peoples of North America saw Witch Hazel as a critically important medicinal plant. As described by Erichsen-Brown in Medicinal and Other Uses of North American Plants: A Historical Survey with Special Reference to Eastern Indian Tribes,  Native Americans used decoctions of leaves and twigs as liniments and mashed up inner bark as poultices for boils, tumors, and other external inflammatory items.  The Iroquois made a tea of the leaves, sweetened with maple syrup.  They drank the leaves unsweetened for diarrhea and other internal inflammation. Today, many of the same uses found traditionally can still be used.

If you are interested in creating sacred smoking blends, witch hazel (the leaf and inner bark) can be a nice addition.  One of the names for the tree was “tobacco wood” and I am guessing that witch hazel can be a good base for a smoking blend (as all astringent woods and plants make a nice smoke).  I’ve only briefly experimented with this, but I think it is well worth considering. Several foraging books, including Gibbons’ Stalking the Wild Asparagus, suggest that Witch Hazel seeds can be eaten but that they are rather oily and bitter. I haven’t tried them yet (I can rarely find them after they pop off of the tree). Although I do not know if it is done in the present day, Native Americans used to make bows from the branches as the wood is quite flexible (Erichsen-Brown, 177). I am unaware of any other uses of Witch Hazel.

Magic of the Witch Hazel: Dowsing, Water Witching, and Wayfinding

Virgula divina. (Diving Rods)
“Some Sorcerers do boast they have a Rod,
Gather’d with Vowes and Sacrifice,
And (borne about) will strangely nod
To hidden Treasure where it lies;
Mankind is (sure) that Rod divine,
For to the Wealthiest (ever) they incline.”

From Epigrams theological, philosophical, and romantick by Samuel Shepard (1651)

As the poem by Samuel Shepard above suggests, one of the most powerful uses of witch hazel is the virgula divina, or the witch hazel divining rod, which can be used to find all manner of buried treasure or other hidden things.  European Hazels were used in Europe for this purpose, and when colonists arrived in the Americas, the Witch Hazel became the quintessential dowsing rod and was seen as a most magical of woods.

Dowsing is performed by turning the arms up and holding a rod in both hands. By observing subtle movements of the rod, one can sense the direction and location of various buried treasures, which can include buried springs, mineral deposits, gold and silver, salt, and potentially other buried treasures. As Erichsen-Brown describes, as early as 1631, there is a record of Witch Hazel branches being employed as “divining rods” (p. 177)   While water is the most commonly dowsed for, Erichsen-Brown also notes the use of witch hazel in the colonial era for finding gold or silver, salt mines, and more. This tradition was extremely widespread, even in sacred Mormon texts the witch hazel rod often had directions whispered to it, telling it where to help look for gold.

As Witch Hazel is native to North America, this dowsing tradition ties to the larger folk magic of Appalachia and beyond. In fact, I was told when we purchased our current homestead that our drinking spring on the property was found by a local dowser in the 1970s.  He used a witch hazel rods that he cut on the property from local wood.  He dowsed commonly and many springs and wells in our immediate area were found by him.  Although dowsing is not as common now as it used to be, it still has power and influence here in the Appalachian mountains.

One of the ways we can think about dowsing is that you can use it to find physical things but also to help find our way. Some dowsers have been able to use their rods to find anything, and this seems closely tied to the overall magic of the witch hazel.  In my own experience, Witch Hazel certainly fits that approach. It helps us find what we are looking for, in that way, it is a wayfaring or pathwalking plant.

Divination and Meanings of Witch Hazel

Witch Hazel brings light and hope into dark places and dark times. I think Witch hazel is a particularly powerful plant for us here in 2020, given the civil unrest, economic insecurity, climate change, and so many other major challenges that we are facing as a species.  It feels like our civilization is going through a very dark time–and witch hazel reminds us that we can shine in that darkness, that even if everything else is retreating and dying back, there is always room for a little hope and joy. 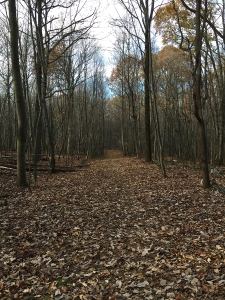 Witch hazel likes to bloom when the rest of the forest looks like this!

Witch hazel assists with finding hidden things. Witch hazel has the longstanding ability within the Appalachian and American folk magic traditions of finding nearly anything: water, gold, silver, salt, minerals, coal, or other buried treasure.  Thus, Witch hazel more generally can help us do that work both physically in the world and, as in our next point, metaphysically within our selves.

Witch hazel is a wayfaring tree.  The wayfinding properties of Witch Hazel make this an important tree to work with if you are on a journey, if you are seeking a new path, or if you are trying to find your way through uncertain times.

What a blessing the Witch Hazel brings us today, and always.

The geese are giving their seal of approval to my new North American TreeLore Oracle deck. This is actually a mock up that I had printed up about two years ago as I was finishing the cards. I’ve been working with it as I’m developing meanings and spreads. #geese #oracledeck #workinprogress #treelore #treeloreoracle #northamericantrees #ecoprinting #widdershins #widdershinsgander
I’ve got a couple of new projects underway, and this is a sneak peek! I’m doing illustrations for each of the wheel of the year for one of the projects! Tonight I was working on Samhain! #illustration #samhain #wheeloftheyear #penandink #penandinkdrawing #drawing #oak #smokecleansing #candles #ritual #workinprogress
The layout from the Tarot of Trees! We are almost sold out of the special fourth edition, but we still have plenty of fifth edition regular size cards :-). Thank you to everyone for your support over the years!!! #tarotoftrees #treetarot #cups #swords #wands #pentacles #tarot #tarotdeck #tarotcards #indiepublishing